We Are Literally Connected To Sasquatch Via The Higgs Field 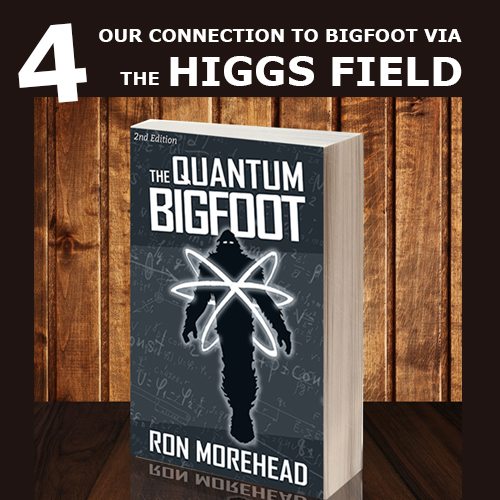 In the fourth chapter of Ron Morehead’s The Quantum Bigfoot, Ron discusses the importance of the God Particle known as the Higgs Boson. Much like Bigfoot, the Higgs Boson was elusive to seekers for decades…unfortunately Bigfoot still is.

Why was this particle so important to find? Discovery of the Higgs Boson particle would prove that we are all connected via a single field. In the 1960’s a scientist named Peter Higgs proposed that there was a field that surrounds us, penetrates us, and binds the universe together.

Here is a very short video that explains the implication of the Higgs Boson:

When scientists nicknamed Higgs Boson as “The God Particle” it carried a spiritual connotation. In The Quantum Bigfoot, Ron continues to quote philosophers and scientists that searched for an elementary particle like the Higgs Boson before it was even defined. These deep thinkers were all looking for the same thing. They were looking for what connected everything together. In this chapter Ron explains how the discovery of the God Particle might give insight on how reported Mind-speak occurs…the inter-connection all life has.

THEY FOUND THE HIGGS BOSON

The God Particle that surrounds us, penetrates us, and binds the universe together was discovered on July 4th, 2012. For the first time after decades of searching, we can now confirm there is a God Particle.

You can buy the Quantum Bigfoot today and learn how science and spirituality are connected through the voices of Dr. Michio Kaku, Dr. Max Planck, Sir Roger Penrose, and Stephen Hawking in the fourth chapter titled Quantum Physics and Spirituality.