About The Bigfoot Recordings

Learn more about the Bigfoot Recordings, Volumes 1 & 2. On this page you can read more about the two CDs and get a quick overview of what you will discover when you order these unique and informational recordings today. 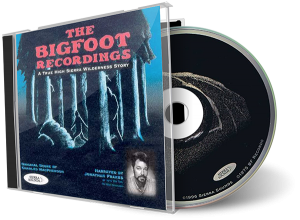 The CD was produced in 1996 and is also available as a digital download. It features very clear creature vocalizations captured by Al Berry in 1972. The microphone was about 40 feet from the camp shelter. The voices and whistles are powerful and carried well in the crisp, windless night air.

Al Berry wrote his account of that evenings’ activities and his effort to obtain professional help toward the study of these sounds. Jonathan Frakes of Star Trek: The Next Generation, narrates with creature vocalizations integrated within the production. Included is an informational booklet ‘Bigfoot Steps in Time’ written by Al Berry.

Interested in downloading these products Instantly? Check out our Bigfoot Digital Downloads! 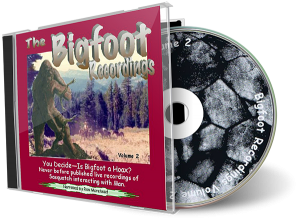 This production, also available as a digital download, was released in January of 2003. It features creature sounds captured by Ron Morehead in 1974 from the same remote location. The vocalizations are different from the intimidating displays the men received in 1971 and 1972. Contained in this CD are rhythmic rapping-pounding sounds, whooping sounds and almost understandable phrases emanating from these creatures. It is thought that these are the only recordings with vocalizing interaction between these creatures and man.

Ron Morehead now tells his story with integrated creature sounds never before available to the public. The story is about 40 minutes long. After hearing the narrative, the listener may go directly to creature vocalizations to hear sounds only.

Interested in downloading these products Instantly? Check out our Bigfoot Digital Downloads!

On Track 10, Ron placed an emergency 911 call that is completely unrelated to the story but nevertheless it provides the listener with a live eyewitness account of an actual sighting.

This Washington resident made the 911 call at night after his German Shepherd was hurled 35 feet over a fence. His Shepherd was old and settled in for the night, unlike his other two younger aggressive dogs. These two dogs would not leave his side that night but the Shepherd took off after sensing a presence. The man went outside to look around, heard his dog squeal, then a heavy thump and immediately saw his dog sailing over his fence landing about 35 feet from where he was tossed. He didn’t know who or what could have done it.

Peter Byrne and Ron Morehead interviewed this man after he made his second 911 call three weeks later. This time, while he was working late in his garage, his sensor lights came on. His garage door was closed but it had eye-level windows and he saw this creature standing 10’ away, looking at him. It ran out from his yard, onto a dirt road and in front of an oncoming car. The car had to swerve to miss the creature.

An advertisement was placed in the local paper seeking anyone that may have information leading to the driver of the car that night … no response.