Voices In The Wilderness 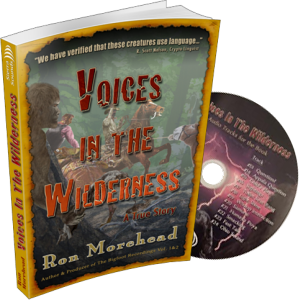 This book is about the experiences of Ron Morehead, a man who witnessed, recorded, and had vocal interactions between himself and a family of giants, commonly referred to as Bigfoot or Sasquatch. His story begins in 1971 when he, along with a group of five other hunters, encountered these creatures in a remote and imposing part of the Sierra Nevada Mountains of California. It spans his 40-year history trekking in-and-out of this secluded area to seek out and understand the enigmas associated with these beings. What makes his story so different and compelling is not only the supporting documentation but the recurrent effort on the part of these ‘beings’ to communicate with this group of hunters. In this book the author has included a CD with actual recorded interactions. It also provides the context in which they were made. When the ‘Track Number’ appears, the reader can play that sound on the CD. The eBook has embedded sound tracks or links to those tracks.

Challenged by skeptics, but time-tested by science, this account brings to the reader an exciting report of unsurpassed vocal interaction between humans and Bigfoot. This book is meant to encourage the Bigfoot enthusiast, direct him or her to those techniques that worked for the author, and to inspire those who still believe we humans have a lot to learn about nature and the cosmos.

Science has established that these unusual sounds were spontaneous and made at the time of the recordings. And, in a more recent study, a complex language was discovered. The author thinks they are sentient and, like humans, can reason using cognizant thought. From a shrewd forest monster to a half-human remnant of a demigod, the reader should be prepared for an exclusive look at what this author thinks. His story also provides the reader with a unique and refreshing insight into the nature of these giants.

But, what exactly are these legendary beings that stealthily roam the forest? Why did they choose to interact with this man and this particular group of hunters? What do they want to convey?