In 1924 the Paiute legend became a reality when some of the first human remains were unearthed by guano miners, and were described as giants and had red hair.  Although those human artifacts can no longer be viewed, having been stored away by the government, the account obviously fascinated me.  Not only because they were called giant and were close to the Sierras, but also because of the non-human skull which I recently witnessed in Paracas, Peru, which had red hair.  Red hair is not indigenous to the Americas.  Plus, the Aztecs and the Mayan recorded their encounters with giants to the North.

In February and June of 1931, large skeletons were found in the Humboldt lake bed, close to Lovelock, Nevada. The first of these two skeletons found measured 8 1/2 feet tall and appeared to have been wrapped in a gum-covered fabric similar to the Egyptian method. The second skeleton was almost 10 feet long (Review – Miner, June 19, 1931).  Like so many, these artifacts have mysteriously disappeared.

In a story told by Sarah Winnemucca Hopkins, around 1880, the Paiute Natives in the Lovelock area warred with the Si-Te-Cah, who were cannibals and had red hair.  The story goes that they fought until they had killed all but a few who hid in a cave.  When the cave was being mined in 1911 the remnants of these red haired people were reportedly found.  Most of the artifacts were lost over time due to lack of interest from science.  Some reports indicate they were gigantic in size.  Some of the remaining artifacts showed a sandal that is 15 inches long.

In March of 2013, I contacted the Winnemucca museum and asked if they had any data supporting the story of red-haired giants.  Their director informed me that although the skulls are robust they are not considered giant.  Also, the museum could no longer display the skulls because they are Native American and the museum could lose its funding.  She also gave me a report from the BLM (Bureau of Land Management) which stated that the story of red-haired giants from the Lovelock cave was a myth… no giant bones at all, and explained that the red hair was dyed.  To produce a red-haired offspring it takes a recessive gene in both parents and only about one and half to two percent of the population has red hair.  Is the issue of red hair important? Yes, it very well could be.  Was Sarah Winnemucca wrong in her writings?

The Winnemucca museum and the BLM deny having any artifacts from that cave associated with giants; “… it’s all just a myth,” they said.

Joe Taylor, an expert in artifact casting, joined me to visit the Lovelock cave.  All-in-all I’ve made four trips to that cave, exploring the aspects of its history.  We noticed a huge print that suggests a giant hand.  It was of the same material that is on the ceiling of the cave.  The ‘find’, which may have just been an inference, was put on the internet by M.K.Davis.  Three weeks later when I returned to the cave the print had been cleaned off.  Who did it, and why? I don’t think an archeological permit could not have been obtained in that short of time. 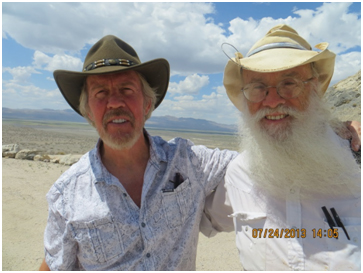 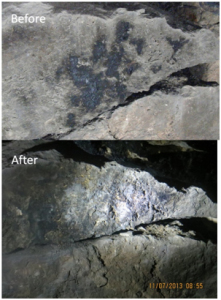