The Spookiness of Quantum Entanglement 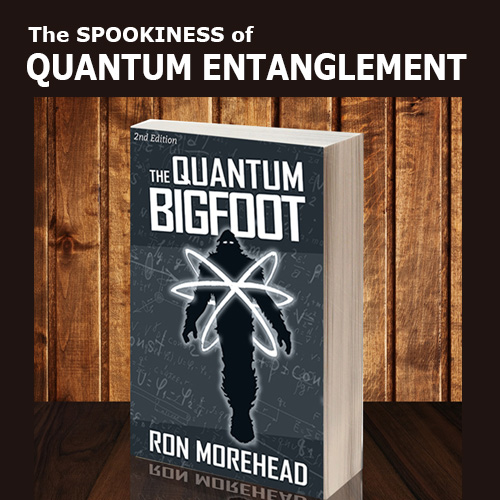 Reality can be stranger than fiction. In the 9th chapter of Ron Morehead’s The Quantum Bigfoot, Ron takes a break from talking directly about Bigfoot, but astute readers will be able to absorb the implications towards the Sasquatch Phenomena, especially if you have been reading the previous eight chapters. This chapter is about how nothing is faster than light. Nothing except for communication through quantum entanglement.

WHAT IS QUANTUM ENTANGLEMENT?

Many explanations of quantum entanglement use spinning particles to describe the phenomena. It can feel abstract and a distraction to understanding the real phenomena. The important part is that two separate objects communicate to each other from distance. Imagine two playing cards on a table, both face down. When you flip one card over face-up, the other card simultaneously flips face-up without you touching it. Both cards move at the same time, but only one was touched. It doesn’t matter which card you flip over the other one instantly flips with you. Entangled particles do this in real life, it has been observed, but that is not the strangest part about quantum entanglement—at least it is not the part that Einstein called spooky.

FASTER THAN LIGHT IS SPOOKY

It gets spooky when you realize these cards (particles) can do this no matter how far apart they are; separate rooms, separate states, separate galaxies. When you flip one card the other will flip too—instantly. Even if these strange cards were 186,000 miles away, the distance light can travel in one second, the communication between these two cards is faster—faster than light. Scientists don’t know how, but they predicted it, observed it, and duplicated quantum entanglement. Again, reality can be stranger than fiction. Spooky even.

DID YOU GIVE A WAY THE WHOLE CHAPTER?

Quantum entanglement is the starting point, Ron expands on how these spooky principles apply to the particles in your body. Every atom in your body typically has three types of particles, you have seven billion, billion, billion atoms. That’s a lot of spooky communication that can happen in one living creature. Imagine what kind of talking your DNA is doing. This is where Ron continues his exploration of quantum entanglement. When you get to the end of the chapter you will be treated with a personal story that will inspire all of us.

Click this link to buy The Quantum Bigfoot. Chapter 9 does what every other chapter does in this awe-inspiring book, it introduces the reader to a piece of quantum mechanics and then imagines how it fits into our spirituality and our shared curiosity for Sasquatch.