To fully understand any specific object, idea or living-being within this universe we should strive for a fuller understanding of their environment. We can better accomplish this by achieving the ability to explain how space and time emerge from something more fundamental. Van Raamsdonk, a physicist at the University of British Columbia in Vancouver, Canada, and his colleagues argue that a radical reconceptualization of reality is the only way to explain what happens when the infinitely dense ‘singularity’ at the core of a black hole distorts the fabric of space-time beyond all recognition. What is the Fabric of Reality? Join us as we explore the idea of Loop Quantum Gravity below.

Even if it is correct, the thermodynamic approach says nothing about what the fundamental constituents of space and time might be. If space-time is a fabric, so to speak, then what are its threads?

One possible answer is quite literal. The theory of loop quantum gravity, which has been under development since the mid-1980s by Ashtekar and others, describes the fabric of space-time as an evolving spider’s web of strands that carry information about the quantized areas and volumes of the regions they pass through. The individual strands of the web must eventually join their ends to form loops — hence the theory’s name — but have nothing to do with the much better-known strings of string theory. The latter move around in space-time, whereas strands actually are space-time: the information they carry defines the shape of the space-time fabric in their vicinity.

Because the loops are quantum objects, however, they also define a minimum unit of area in much the same way that ordinary quantum mechanics defines a minimum ground-state energy for an electron in a hydrogen atom. This quantum of area is a patch roughly one Planck scale on a side. Try to insert an extra strand that carries less area, and it will simply disconnect from the rest of the web. It will not be able to link to anything else, and will effectively drop out of space-time.

This simulation shows how space evolves in loop quantum gravity. The colours of the faces of the tetrahedra indicate how much area exists at that given point, at a particular moment of time.

One welcome consequence of a minimum area is that loop quantum gravity cannot squeeze an infinite amount of curvature onto an infinitesimal point. This means that it cannot produce the kind of singularities that cause Einstein’s equations of general relativity to break down at the instant of the Big Bang and at the centres of black holes.

In 2006, Ashtekar and his colleagues reported a series of simulations that took advantage of that fact, using the loop quantum gravity version of Einstein’s equations to run the clock backwards and visualize what happened before the Big Bang. The reversed cosmos contracted towards the Big Bang, as expected. But as it approached the fundamental size limit dictated by loop quantum gravity, a repulsive force kicked in and kept the singularity open, turning it into a tunnel to a cosmos that preceded our own.

This year, physicists Rodolfo Gambini at the Uruguayan University of the Republic in Montevideo and Jorge Pullin at Louisiana State University in Baton Rouge reported a similar simulation for a black hole. They found that an observer travelling deep into the heart of a black hole would encounter not a singularity, but a thin space-time tunnel leading to another part of space. “Getting rid of the singularity problem is a significant achievement,” says Ashtekar, who is working with other researchers to identify signatures that would have been left by a bounce, rather than a bang, on the cosmic microwave background — the radiation left over from the Universe’s massive expansion in its infant moments.

Loop quantum gravity is not a complete unified theory, because it does not include any other forces. Furthermore, physicists have yet to show how ordinary space-time would emerge from such a web of information. But Daniele Oriti, a physicist at the Max Planck Institute for Gravitational Physics in Golm, Germany, is hoping to find inspiration in the work of condensed-matter physicists, who have produced exotic phases of matter that undergo transitions described by quantum field theory. Oriti and his colleagues are searching for formulae to describe how the Universe might similarly change phase, transitioning from a set of discrete loops to a smooth and continuous space-time. “It is early days and our job is hard because we are fishes swimming in the fluid at the same time as trying to understand it,” says Oriti. 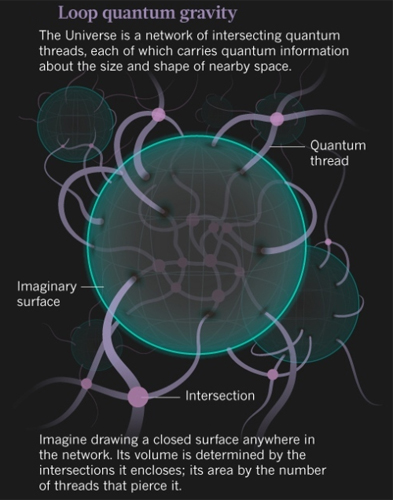