The Fabric of Reality | Holography

To fully understand any specific object, idea or living-being within this universe we should strive for a fuller understanding of their environment. We can better accomplish this by achieving the ability to explain how space and time emerge from something more fundamental. Van Raamsdonk, a physicist at the University of British Columbia in Vancouver, Canada, and his colleagues argue that a radical reconceptualization of reality is the only way to explain what happens when the infinitely dense ‘singularity’ at the core of a black hole distorts the fabric of space-time beyond all recognition. What is the Fabric of Reality? Join us as we explore the idea of Holography below.

Meanwhile, Van Raamsdonk has proposed a very different idea about the emergence of space-time, based on the holographic principle. Inspired by the hologram-like way that black holes store all their entropy at the surface, this principle was first given an explicit mathematical form by Juan Maldacena, a string theorist at the Institute of Advanced Study in Princeton, New Jersey, who published11 his influential model of a holographic universe in 1998. In that model, the three-dimensional interior of the universe contains strings and black holes governed only by gravity, whereas its two-dimensional boundary contains elementary particles and fields that obey ordinary quantum laws without gravity.

In 2010, Van Raamsdonk studied what that means when quantum particles on the boundary are ‘entangled’ — meaning that measurements made on one inevitably affect the other12. He discovered that if every particle entanglement between two separate regions of the boundary is steadily reduced to zero, so that the quantum links between the two disappear, the three-dimensional space responds by gradually dividing itself like a splitting cell, until the last, thin connection between the two halves snaps. Repeating that process will subdivide the three-dimensional space again and again, while the two-dimensional boundary stays connected. So, in effect, Van Raamsdonk concluded, the three-dimensional universe is being held together by quantum entanglement on the boundary — which means that in some sense, quantum entanglement and space-time are the same thing.

Or, as Maldacena puts it: “This suggests that quantum is the most fundamental, and space-time emerges from it.” 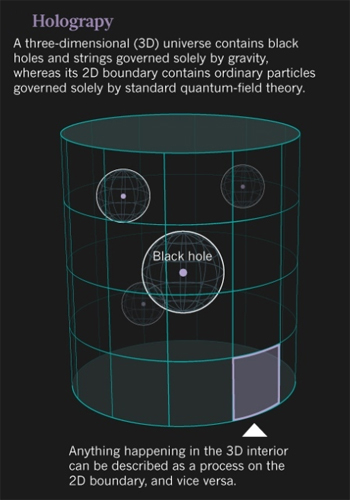