The Fabric of Reality | Gravity as Thermodynamics

To fully understand any specific object, idea or living-being within this universe we should strive for a fuller understanding of their environment. We can better accomplish this by achieving the ability to explain how space and time emerge from something more fundamental. Van Raamsdonk, a physicist at the University of British Columbia in Vancouver, Canada, and his colleagues argue that a radical reconceptualization of reality is the only way to explain what happens when the infinitely dense ‘singularity’ at the core of a black hole distorts the fabric of space-time beyond all recognition. What is the Fabric of Reality? Join us as we explore the idea of Gravity as Thermodynamics below.

One of the most obvious questions to ask is whether this endeavour is a fool’s errand. Where is the evidence that there actually is anything more fundamental than space and time?

A provocative hint comes from a series of startling discoveries made in the early 1970s, when it became clear that quantum mechanics and gravity were intimately intertwined with thermodynamics, the science of heat.

In 1974, most famously, Stephen Hawking of the University of Cambridge, UK, showed that quantum effects in the space around a black hole will cause it to spew out radiation as if it was hot. Other physicists quickly determined that this phenomenon was quite general. Even in completely empty space, they found, an astronaut undergoing acceleration would perceive that he or she was surrounded by a heat bath. The effect would be too small to be perceptible for any acceleration achievable by rockets, but it seemed to be fundamental. If quantum theory and general relativity are correct — and both have been abundantly corroborated by experiment — then the existence of Hawking radiation seemed inescapable.

A second key discovery was closely related. In standard thermodynamics, an object can radiate heat only by decreasing its entropy, a measure of the number of quantum states inside it. And so it is with black holes: even before Hawking’s 1974 paper, Jacob Bekenstein, now at the Hebrew University of Jerusalem, had shown that black holes possess entropy. But there was a difference. In most objects, the entropy is proportional to the number of atoms the object contains, and thus to its volume. But a black hole’s entropy turned out to be proportional to the surface area of its event horizon — the boundary out of which not even light can escape. It was as if that surface somehow encoded information about what was inside, just as a two-dimensional hologram encodes a three-dimensional image.

In 1995, Ted Jacobson, a physicist at the University of Maryland in College Park, combined these two findings, and postulated that every point in space lies on a tiny ‘black-hole horizon’ that also obeys the entropy–area relationship. From that, he found, the mathematics yielded Einstein’s equations of general relativity — but using only thermodynamic concepts, not the idea of bending space-time1.

“This seemed to say something deep about the origins of gravity,” says Jacobson. In particular, the laws of thermodynamics are statistical in nature — a macroscopic average over the motions of myriad atoms and molecules — so his result suggested that gravity is also statistical, a macroscopic approximation to the unseen constituents of space and time.

In 2010, this idea was taken a step further by Erik Verlinde, a string theorist at the University of Amsterdam, who showed2 that the statistical thermodynamics of the space-time constituents — whatever they turned out to be — could automatically generate Newton’s law of gravitational attraction.

And in separate work, Thanu Padmanabhan, a cosmologist at the Inter-University Centre for Astronomy and Astrophysics in Pune, India, showed3 that Einstein’s equations can be rewritten in a form that makes them identical to the laws of thermodynamics — as can many alternative theories of gravity. Padmanabhan is currently extending the thermodynamic approach in an effort to explain the origin and magnitude of dark energy: a mysterious cosmic force that is accelerating the Universe’s expansion.

Testing such ideas empirically will be extremely difficult. In the same way that water looks perfectly smooth and fluid until it is observed on the scale of its molecules — a fraction of a nanometre — estimates suggest that space-time will look continuous all the way down to the Planck scale: roughly 10−35 metres, or some 20 orders of magnitude smaller than a proton.

But it may not be impossible. One often-mentioned way to test whether space-time is made of discrete constituents is to look for delays as high-energy photons travel to Earth from distant cosmic events such as supernovae and γ-ray bursts. In effect, the shortest-wavelength photons would sense the discreteness as a subtle bumpiness in the road they had to travel, which would slow them down ever so slightly. Giovanni Amelino-Camelia, a quantum-gravity researcher at the University of Rome, and his colleagues have found4 hints of just such delays in the photons from a γ-ray burst recorded in April. The results are not definitive, says Amelino-Camelia, but the group plans to expand its search to look at the travel times of high-energy neutrinos produced by cosmic events. He says that if theories cannot be tested, “then to me, they are not science. They are just religious beliefs, and they hold no interest for me.”

Other physicists are looking at laboratory tests. In 2012, for example, researchers from the University of Vienna and Imperial College London proposed5 a tabletop experiment in which a microscopic mirror would be moved around with lasers. They argued that Planck-scale granularities in space-time would produce detectable changes in the light reflected from the mirror (see Nature http://doi.org/njf; 2012). 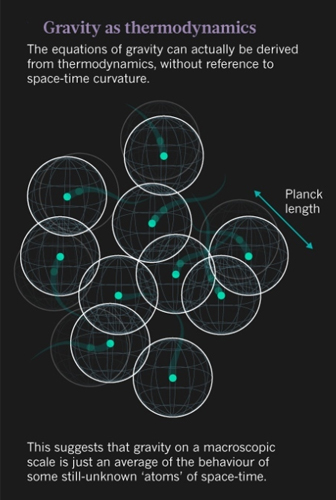