To fully understand any specific object, idea or living-being within this universe we should strive for a fuller understanding of their environment. We can better accomplish this by achieving the ability to explain how space and time emerge from something more fundamental. Van Raamsdonk, a physicist at the University of British Columbia in Vancouver, Canada, and his colleagues argue that a radical reconceptualization of reality is the only way to explain what happens when the infinitely dense ‘singularity’ at the core of a black hole distorts the fabric of space-time beyond all recognition. What is the Fabric of Reality? Join us as we explore the idea of Causal Dynamical Triangulations below.

That hardly constituted proof, however, and causal set theory has offered few other predictions that could be tested. Some physicists have found it much more fruitful to use computer simulations. The idea, which dates back to the early 1990s, is to approximate the unknown fundamental constituents with tiny chunks of ordinary space-time caught up in a roiling sea of quantum fluctuations, and to follow how these chunks spontaneously glue themselves together into larger structures.

The earliest efforts were disappointing, says Renate Loll, a physicist now at Radboud University in Nijmegen, the Netherlands. The space-time building blocks were simple hyper-pyramids — four-dimensional counterparts to three-dimensional tetrahedrons — and the simulation’s gluing rules allowed them to combine freely. The result was a series of bizarre ‘universes’ that had far too many dimensions (or too few), and that folded back on themselves or broke into pieces. “It was a free-for-all that gave back nothing that resembles what we see around us,” says Loll.

This simplified version of causal dynamical triangulation uses just two dimensions: one of space and one of time. The video shows two-dimensional universes generated by pieces of space assembling themselves according to quantum rules. Each colour represent a slice through the universe at particular time after the Big Bang, which is depicted as a tiny black ball.

But, like Sorkin, Loll and her colleagues found that adding causality changed everything. After all, says Loll, the dimension of time is not quite like the three dimensions of space. “We cannot travel back and forth in time,” she says. So the team changed its simulations to ensure that effects could not come before their cause — and found that the space-time chunks started consistently assembling themselves into smooth four-dimensional universes with properties similar to our own10.

Intriguingly, the simulations also hint that soon after the Big Bang, the Universe went through an infant phase with only two dimensions — one of space and one of time. This prediction has also been made independently by others attempting to derive equations of quantum gravity, and even some who suggest that the appearance of dark energy is a sign that our Universe is now growing a fourth spatial dimension. Others have shown that a two-dimensional phase in the early Universe would create patterns similar to those already seen in the cosmic microwave background. 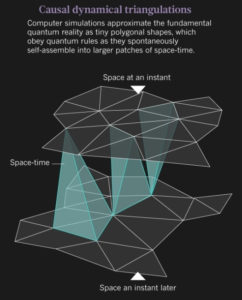