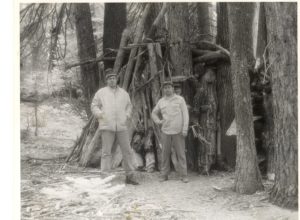 Al Berry and Warren Johnson at the Sierra camp shelter, 1972. During the winter of 1971, Warren wrote a 23 page letter to Ivan Sanderson (Society for the Investigation of the Unexplained) detailing the events that were taking place at the camp. Sanderson forwarded the letter to Peter Byrne, who was heading up an investigative team in the Washington/Oregon area and Byrne contacted Berry. Al was then a reporter working for the Redding Searchlight Newspaper. All of them originally thought the whole story was probably a hoax and Al Berry was there specifically to uncover that hoax. He recorded vocalizations and eventually fostered a University of Wyoming study, which was later published in a book by the UBC Press, “Manlike Monsters on Trial.”