Preface – Voices in the Wilderness 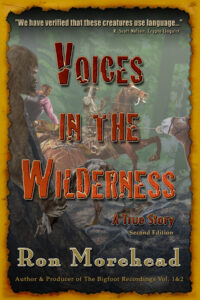 Preface – Voices in the Wilderness

Could thousands of reports claiming to have seen a Bigfoot be wrong? How many of those reports could be real?  If just one is real, then a creature known as Bigfoot exists.  But exactly what is this legendary giant that has been stealthfully roaming the forest?

Join Ron Morehead as he tells his story of the encounters that took place, and are still taking place, in a remote region of the mountains of California. His decades researching and delving into the mysteries that surround this phenomenon are electrifying, compelling, and fascinating to say the least.

For several years Ron has been presenting his Sierra Sounds to groups all over the world, the vocalizations he and the other hunters captured are one-of-a-kind recordings, have been professionally studies and are judged credible. These creatures, whatever they are, have their own language and are trying to communicate.  What are they saying? Why interact with this particular group of hunters?

Read about and hear the interactive sequences along with Ron’s complete story about the 40-year adventure-of-a-lifetime at this remote area in the High Sierra Mountains of California.