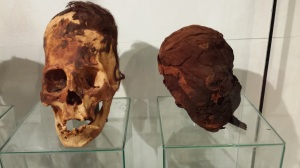 These skulls were unearthed in a grave near Paracas, Peru. Three were found together; believed to be the father, mother, and a child. The elongated feature of the skulls was not cranial deformation (cradle-boarding), but was elongated naturally. Unlike humans, who have two parietal bones in the skull, all of these had a single parietal bone and would have had approximately 30 percent more brain area. Another feature worth noting was that all had red hair. Red hair is not indigenous to the Americas. Ron Morehead was present when the child’s skull was unwrapped for the first time.