Author/Adventurist Ron Morehead, producer of the Sierra Sounds, has been known for decades for his world-wide research into the Bigfoot/Sasquatch phenomenon. To date, he comes closer than any other researcher to having a complete body of evidence. The Sierra Sounds are the only Bigfoot recordings that have been scientifically studied, time-tested, and accredited as genuine. Ron has documented his personal interactions with these giant beings and produced his story on a CD and also in a book, “Voices in the Wilderness.”
Click to Read Ron's Latest Research

GIANTS IN THE OLD TESTAMENT: PART I AMORITES

Giants are no strangers to human history and more than one Bigfoot Researcher has mentioned the possibility that the Giants in Genesis known as the Nephilim are a reference to ancient Bigfoot. There are several giants referenced in the book of Genesis that are not as explicit. The website Answers in Genesis does a great job uncovering many of the giants that are less well-known.

The Amorites are mentioned more than 80 times in Scripture, and early on, some were allied with Abraham (Genesis 14:13). They were descendants of Noah’s grandson Canaan (Genesis 10:15–16). Although the Bible does not provide this information, the Jewish general-turned-historian Josephus gives the name of their ancestor as Amorreus.1 While the Amorites are mentioned in the same contexts as other giants a few times, they are specifically described as giants in the Minor Prophets.

“Yet it was I who destroyed the Amorite before them, whose height was like the height of the cedars, and he was as strong as the oaks; yet I destroyed his fruit above and his roots beneath. Also it was I who brought you up from the land of Egypt, and led you forty years through the wilderness, to possess the land of the Amorite” (Amos 2:9–10).

Through Amos, God clearly stated that the Amorites were generally very tall and strong. Some may downplay the description of the Amorites in this passage, since these verses employ figurative language, but there are some good reasons to take this passage in a straightforward manner.

The idea that the Amorites were giants is supported by the report of the spies whom Moses sent through the land of Canaan. The Amorites were one of the people groups they saw (Numbers 13:29), and they claimed that “all the people whom we saw in it are men of great stature” (Numbers 13:32). It is telling that in their response, Joshua and Caleb did not challenge the size of the land’s inhabitants (Numbers 14:6–9)

Were there Giants among men referenced in the Bible? Were these giants ancient Bigfoot and Sasquatches?? Besides the Nephilim there could be others like the Rephaim, Zuzim, Emim, and Amorites mentioned above. Ron Morehead believes the Old Testament may contain clues to Sasquatch and further our knowledge about Bigfoot in ancient times. 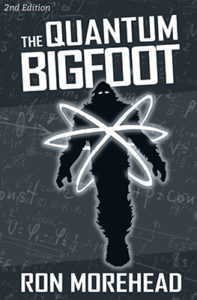 “The Quantum Bigfoot” excerpts from chapter 5:

The quantum world of physics also provides an explanation for those folks who believe in God…how divine energy infiltrates the world we live in. If we allow our minds to capture this thought we all win. Many religious people have never before considered quantum physics as the way God works throughout the universe, on this planet, in you and in me.
The quantum laws, which were brought to light in the 19th century, are the same that was taught by Jesus over 2000 years ago. The very Oneness of connection He shows us in John 17:22-23. As humans, we all have it, so why are we not walking on water?

Is there really a possible physical connection that can take us to another realm of reality…something that is not really in woo-woo land, or that can only be found in church on Sunday by bowing our heads or…