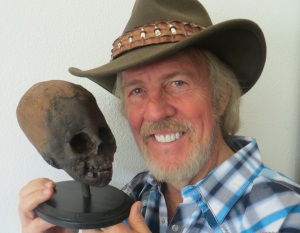 Ron Morehead holds an exact replica of an infant’s skull from Paracas, Peru. This was unwrapped from its mummified state during an exploratory trip with the Watchers Filming crew. It was originally found in the same tomb with two others thought to be the father and the mother. Examination by a dental expert determined the infant was about 14-18 months old at the time of death.   As seen in the picture, this skull had red hair…just like both of the parents. Red hair is not indigenous to the Americas.