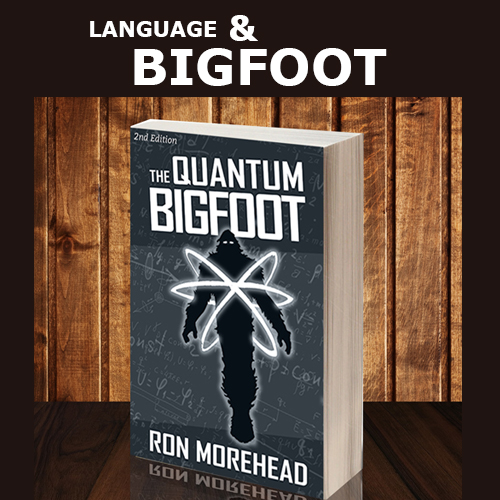 BEES DO IT, BIRDS DO IT

Communication among living creatures is nothing new. Ants use pheromones to warn other ants of danger. Bees dance to provide instructions to where the best pollen is. Frogs croak, birds tweet, wolves howl, and whales sing. While these are all forms of communication, none of these are necessarily examples of language.

Language is different, more specific, and rare among living creatures. To say Bigfoots communicate is too broad. Bigfoots use language and that’s quite remarkable.

THE SIERRA SOUNDS of BERRY/MOREHEAD TAPES

In the eighth chapter of Ron Morehead’s The Quantum Bigfoot, Ron introduces the difference between mere communication and actual language. This chapter is based on the evidence of Bigfoot language in the recordings known to bigfooters as the Sierra Sounds or academically known as the Berry/Morehead tapes. These tapes have been scrutinized by an investigative journalist, a university-level electrical sound engineer, and a Navy cryptolinguist (someone who deciphers coded language for the military). All three experts agree that these tapes were not tampered with and no human could make those sounds. The third expert even found language.

The details of how language was found is an interesting tale and worth reading the chapter in itself. Beyond that there is an even more interesting argument laid out by Ron Morehead. Even if bigfooters have had the sense that Bigfoots communicate, we may be taking it for granted that it is language.

WHAT IS THE DIFFERENCE?

There are a few things that Bigfoots are probably doing when they speak to each other that is beyond animal communication. First, they are recomposing words and syntax. If a bee tried to change the dance sequence to a pollen source it would send the entire hive to the wrong place. A Bigfoot could alert another Bigfoot to a food source through multiple ways because…language. Another difference is language is taught and learned. Humans that are not exposed to language during their youth have trouble acquiring language as adults. Animals communicate mostly genetically.

You should buy the Quantum Bigfoot today to learn how significant shared language is among Bigfoot. We didn’t even get into the biblical texts or the spiritual nature of language. This is why you need the Quantum Bigfoot, the only book that bridges the gap between Quantum Physics and Sasquatch.