Book Review: Voices In The Wilderness 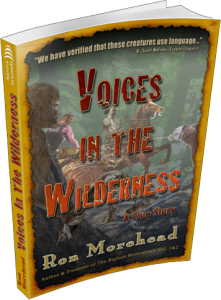 Voices in the Wilderness (Second Edition)

This book, which also comes with an accompanying CD to complement the descriptions of various sounds, is perhaps one of the better books on the Sasquatch phenomena I have read this year.

Ron Morehead is the founder and proprietor of Bigfoot Sounds, or Bigfoot Recordings  and began his interest in this subject in the early-70′s when his friend Bill McDowell told him of some unusual vocalizations being heard in a remote wilderness camp in the High Sierras of California.

Upon investigation, Ron found that there was indeed something unusual going on in that area, along with several other unusual happenings, most of which do not seem to be related to Sasquatch activity, but are unusual in and of themselves. Ron, along with McDowell, Warren and Louis Johnson invited Alan Berry, a newspaper journalist, to come in and investigate, and Al recorded some amazing sounds, as did Ron and his group, sounds which were later analyzed by Dr. R. Lynn Kirlin and found to not be artificially made or manufactured otherwise or pre-recorded.

Ron would often take his family members into the camp, most notably his daughter Rhonda, who had a couple of sightings herself.

Ron eventually sought out another opinion on the recordings, after releasing two volumes of CDs which have been alternately known as the Bigfoot Recordings or the Sierra Sounds. That opinion was that of former Naval Crypto-Linguist R. Scott Nelson, who began looking into these sounds in around 2008, and released a report which shocked the Bigfoot Community-these creatures were speaking a LANGUAGE!!!!!! Unknown, to be sure, but still a language. Nelson’s findings have been of great interest to a lot of Bigfoot researchers and enthusiasts, and some who have made recordings of their own of strange vocalizations have sent their recordings to Nelson for his expert opinion.

Ron also takes Nelson on a few trips to the area where he obtained the original recordings in the ’70′s, but there has been one disaster after the other which enabled them to only stay a few days there at best. However, Ron did hear sounds, which confirmed to him that the creatures are still there, even after all this time.

He concludes the book with some rather interesting theories as to what these beings are, not all of which I agree with, but Ron makes interesting arguments for his case as to these various theories, and I respect his right to his opinion.

Overall, this is a great book, now in its Second Edition, and if one owns the CD’s Ron produced in the mid-90′s and early-00′s, this book and those CD’s give a fairly complete picture of what he experienced in his times in that remote hunting camp. There are also some great (and rare) photographs throughout the book which really enhance the reading experience, most in color. I give this book a perfect 10 out of 10. Really enjoyable and compelling.

This book review is a reprint from http://southeastsasquatchassociation.blogspot.com