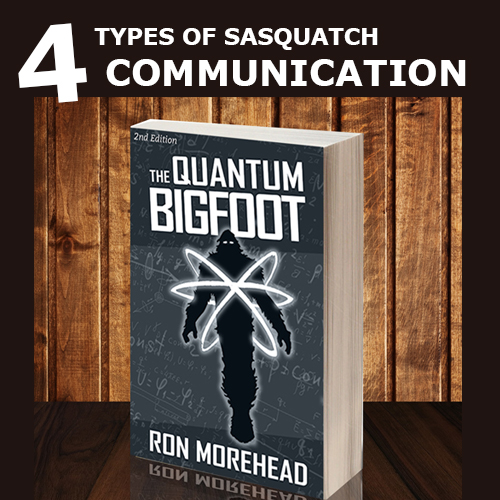 In the third chapter of Ron Morehead’s The Quantum Bigfoot, he discusses attributes associated to Sasquatch based on multiple encounters and sightings. He even shares a special wood knocking experience he had in the Sierra Camp in 2011. Along with wood knocking, Ron also shares other possibilities of Sasquatch communication that include mind speak, glyphs, and vocalization. In this post, we tease a little bit about all four ways that Sasquatch may communicate.

To the uninitiated, a bigfoot wood knock is a series 3 to 4 knocks heard from a distance. The knocks are usually rhythmic and the pattern repeats. Although there have not been any reported sightings of wood knocking behavior, many encounters include the tree knocking sound. In fact, many researchers have not only used wood on wood to try to attract a bigfoot, but those same researchers have often heard the knocks returned.

The last time Ron wrote about a knocking sound was in his book, Voices in the Wilderness, noting that, “it sounded like a pop or a gunshot within feet of me…”

It seems that we can reproduce similar sounds with wood knocking on wood, but Ron suggests that there may be a clue to why witnesses haven’t reported this activity, but almost all bigfoot enthusiasts have heard it. Maybe the sound is not from wood at all, perhaps there is a quantum explanation for the sound. You can read more about it in the third chapter of The Quantum Bigfoot.

Broadly Bigfoot telepathy is interchangeable with Bigfoot mind speak, although it can be argued that due to the unique features of bigfoot mind speak it warrants its own term. Bigfoot mindspeak takes on the extra dimension of being able to transfer emotions as well.

Ron addresses multiple possible factors in what may be the cause of mind speak that include quantum entanglement at features of the pineal gland.

Glyphs left by Sasquatch are usually in the form of arranged sticks and twisted twigs in the form of a shape that resembles a logogram unfamiliar to western languages; like Japanese kanji or the writing of Proto-Norse runes.

Indigenous people often arranged stick structures as trail markers like highway exit signs to indicate water sources and medicine. Sasquatch may be trying to tell us the same things.

In The Quantum Bigfoot Ron asks why would they leave signs if they can mind speak. For one reason the message may be particular to that place, but Ron also suggests another reason that depends on how humans visualize information.

Ron Morehead is most known for the Sierra Sounds, a collection of Bigfoot vocalizations. In fact, in a year-long study at the University of Wyoming, it was established that the vocalizations which were recorded were not manufactured by an alternative source, i.e., speakers, amplifiers, or man. Even more recently, in 2008, it was established, through a Crypto-Linguistic study, that the sounds have a complex language structure.

Are they talking to each other in a language unique to Sasquatch? Are their voices capable of doing more than communication? You will have to pick up Ron Morehead’s The Quantum Bigfoot to find out what quantum possibilities Bigfoot vocalizations might have.

This has been a teaser of the third chapter of Ron’s book. You can buy the Quantum Bigfoot today and also read even more about the other possibilities of Sasquatch communication that include wood knocks, mind speak,  glyphs, and vocalization. The chapter offers so much more depth. In fact, the entire book has over 20 chapters that incorporate quantum physics and spirituality into the Bigfoot phenomena.